The surveying equipment you typically use probably carries a price tag measured in tens of thousands of dollars. Now a new device called Reach, costing just $235, offers a similar level of precision at a fraction of the price. It’s based on the Intel® Edison microcomputer platform, and measures just 26mm x 45mm. With surveying equipment often being prohibitively expensive for the developing world, Reach makes professional measurement affordable for construction and surveying applications there, and also creates opportunities to lower the cost of surveying work in developed economies.

“We can’t completely replace professional systems,” said Igor Vereninov, co-founder at Emlid, the company behind the device. “They perform better in challenging environments and can have larger distances from rover to base. But we are bringing a similar precision at a drastically lower price point.” 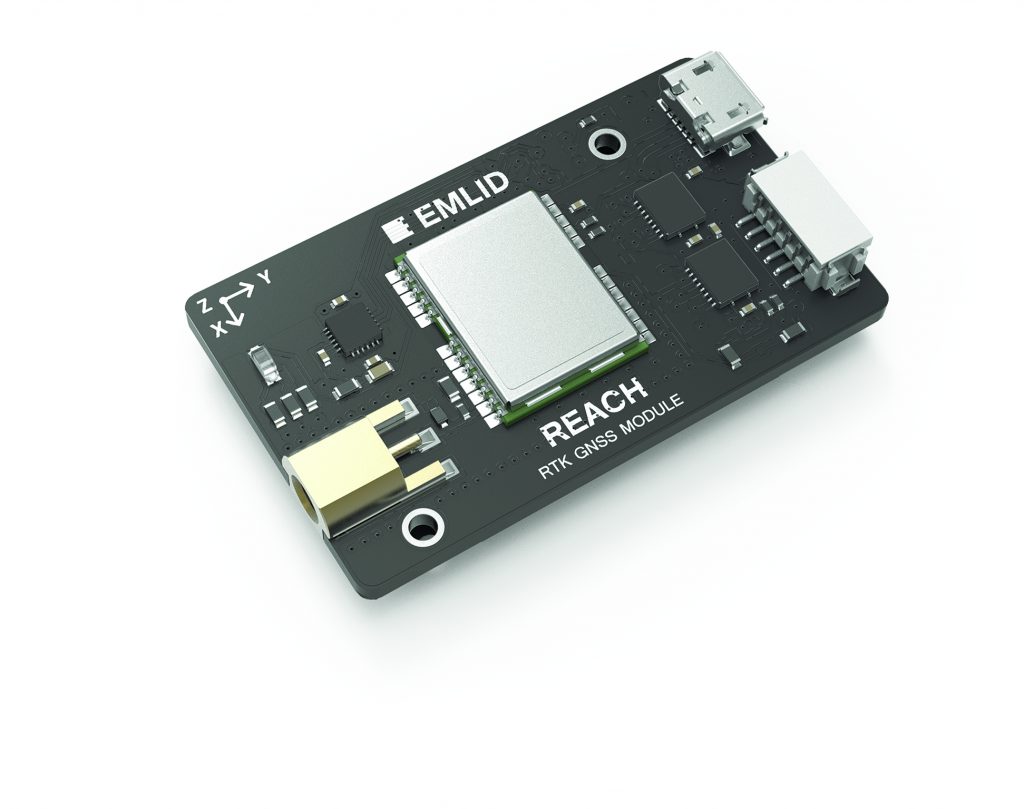 A Reach device can be used as a mobile client, or as a base station if it is stationary and its coordinates are known. This way, a system of two receivers connected to one another using wi-fi Internet access or radio communications can calculate precise coordinates even if no other DGPS base stations are available.

The position of base stations can be measured accurately using commercially or freely available correction services in many countries, including the Continuously Operating Reference Stations (CORS) network. If the precise location of the base station is not known, the mobile clients can still consistently and accurately calculate their position relative to the base station.

Lifting the lid on Reach

The Reach hardware platform consists of three components: an Intel Edison computer running a custom, Yocto-built, Linux operating system and RTKLIB; a U-blox GPS-receiver; and an external Tallysman antenna, which plays an important role in enabling accurate positioning. Users can choose to fit an alternative antenna if it is better suited to their application, for example a rugged unit that suppresses interference from nearby machinery. “The antenna quality and placement are essential for RTK,” said Vereninov. “It should be the first thing to plan on the device to ensure the best sky visibility and least interference. Everything else flows from that.”

The device can also record timing markers from any pulse clock source. A common problem in 3D mapping is that you need to know the exact location of where the aerial photos were taken. When an aircraft is moving at 20m/s, a buffering delay on the camera of 1 second can result in an image being 20m off from the coordinate recorded when it was triggered. Reach can be connected to the hot shoe of the camera to precisely timestamp when the flash was fired, which happens at the same time as the photo is taken. By analyzing the GPS data after the flight, the photos can be accurately matched with their position.

The founders of Emlid previously integrated survey-grade GPS receivers into autopilots and mapping systems for a major commercial manufacturer. The idea for Reach came when Emlid sampled the RTKLIB toolkit developed by Tomoji Takasu and supported by the open source community (the toolkit has a BSD License). “We were using it to postprocess data from flights, but we quickly saw its potential,” said Vereninov. “If we wanted to do real-time positioning, though, we needed to have the receiver connected to a PC at all times. For surveying work, you use a laptop. We had the idea to use an Intel Edison single board computer, which can replace the laptop in this application, so RTKLIB runs on the GPS receiver itself.”

The ReachView software enables any device with a web browser to connect to Reach to set up RTKLIB, view device logs, assess the quality of satellite observations, change streaming settings, configure connections and check the device position.  The ReachView software is open source and is distributed under the GNU GPLv3 License. “ReachView provides access to all the features of RTKLIB,” said Vereninov. “At the same time, we’ve simplified it by explaining what each feature does and using understandable names for the parameters. We’ve designed the interface so you don’t have to be a surveyor or RTK specialist to set up the devices.”

To support users, Emlid has launched a forum, and provided detailed documentation on the website.

Why did the developers select Edison? “The best thing about Intel Edison is the price-performance ratio,” said Vereninov. “It’s a really powerful platform, using x86 architecture, with wi-fi and Bluetooth integrated. We use the built-in Bluetooth to connect Android tablets to Reach, so Reach can replace the GPS on Android devices for more accurate geographic information systems (GIS) applications. Wi-fi is important for connecting to the Internet to receive corrections from the base station. When you’re trying to integrate radio frequency equipment, you usually need to certify it, but with Intel Edison everything is preintegrated and precertified.”

The Intel Edison platform has 4 GB memory to log data, so that it can be analyzed with greater precision after data collection. USB can be used to connect radios for communication between Reach devices and in the future 3G communications and flash drive logging could be added through software updates.

Reach can be powered through the USB port, powered from the autopilot in a drone, or powered using a power bank typically used for charging a mobile phone.